Squamous Cell Carcinoma - When should you worry? 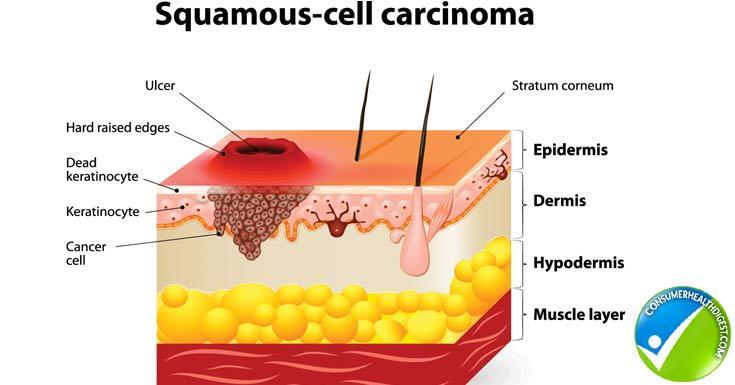 Today we are discussing squamous cell carcinoma (SCC) because it is a topic that I am very passionate about and one that I feel causes a fair bit of confusion.  SCC is the second most common form of skin cancer and, in the South, the number of people who die from SCC of the skin is about equal to the number of people who die from melanoma.  I have heard many patients and, unfortunately, several physicians say that SCC should not be of great concern and that I make too big of a deal out of this particular cancer.  The truth is, not all SCCs are extremely aggressive.  While a significant number of these cancers are treated with simple surgery or a burn and scrape technique known as electrodessication and curettage, there is a subset of these tumors that behave in a very aggressive manner.  Some of these tumors can be as aggressive and deadly as an invasive malignant melanoma.  There are particular clinical and histopathological (microscopic) findings of SCC which suggest a nastier course and we will discuss those later in the blog.

The question then becomes, why are some skin cancers so bad while others seem to be so easily treated?  That is a very good question and a very important question.  The answer, however, is quite complicated as there is a lot about cancer in general that we do not understand.  Medicine itself is imperfect.  We would like to think that we have all the answers, but the reality is that we make assumptions and judgments based on the information that we have.  Unfortunately that information is incomplete.  The picture is still being painted.  We learn everyday that diseases themselves are difficult to put into neat little boxes, with the truth being that most diseases run a spectrum from relatively benign to very destructive, and everything in between.  What makes us better equipped to anticipate and handle difficult situations is our experience with diseases over time.  What we have observed and recorded (statistical and historical data) help us to make sound and educated judgment calls in specific situations.  As time goes on, our understanding will grow and hopefully one day we will be able to answer the question posed earlier.

So what types of data guide us when it comes to SCC?  There are several factors to consider when deciding if a SCC may behave in an aggressive manner and it is important to ask your doctor specifically about the nature of your cancer.  These factors include the site of the lesion, the size of the lesion, the depth of the lesion, the histopathological subtype (meaning what specific pattern of growth, and associated microscopic findings, that are noted on the pathology report), recurrent/previously treated lesions, tumors previously treated with radiation, rapidly growing tumors, tumors at sites of chronic inflammation (like swollen and red lower legs or areas of slowly healing or chronic wounds), and if there is tumor seen invading the nerves and/or blood vessels.

So what might you want to know about your biopsy?  There are several different types of SCC.  Some are referred to as squamous cell carcinoma in situ.  This means the cancer is confined to the upper part of the skin known as the epidermis and is not considered an invasive tumor.  The first thing you want to know is whether or not your cancer is invasive, meaning it has spread to the lower part of the skin, known as the dermis.  Next, I would recommend asking your physician if your tumor is considered a high risk tumor.  High risk tumors are defined as having one or more of the following features:

Treatment is tailored to the specific tumor and specific patient situation.  Most non-aggressive tumors should be treated with surgery or electrodessication and curettage.  More aggressive tumors should be treated with surgery.  Mohs surgery is a highly effective treatment option for SCC and is considered the best option in certain circumstances.  Following surgery, we will sometimes recommend radiation therapy and possible lymph node biopsy, but these are only used in extreme cases.  Your doctor will recommend a treatment plan and remember, it never hurts to get a second opinion if you are unsure.